When you set a reflections sensory bin, it’s all about visual system and playing with light and shadow. This type of activity is new to most of the kids and they find it fun and fascinating.

My son loves light play and I wanted to set up an activity where he could see the reflections of his favourite light cubes.

However, we came up against a problem. Our mirrors would not fill our sensory bin. No matter which way I placed the mirrors they wouldn’t cover the entire base.

I suddenly realised that we had a resource in the kitchen cupboard which would work just as well – tin foil! Our Reflections Sensory Bin was saved.

I covered both sides of a sensory bin with tin foil and then placed an additional sheet on the inside of the tub. I placed six light cubes

into the bin and we turned off the light.

I had thought our colour changing light cubes

were good before the activity but with the addition of tin foil they were brilliant!

As they slowly changed colour the reflections in the tin foil changed. From blues to reds to yellows and greens the sensory bin changed frequently.

I had expected my son to be interested in building towers with the light cubes. However, due to the tin foil he was captivated in the ever changing reflections whilst shouting out the different colours he could see.

He then went on to explore moving the light cubes around to see if the reflections changed if the cubes were pushed together or placed apart.

After a while though his plastic toy animals

He decided that the light cubes would make a great disco zoo for his animals. The zoo even included a dinosaur!

Tidying up was so easy. As my son turned off each individual light cube I folded up the tin foil for it to be reused again.

What to Try Next?

This post may contain affiliate links and we will earn a small provision if you make a purchase through them. Read full disclosure.
« How to Get Started with Sensory Play for Beginners
Slippery LEGO Sensory Play »

Hello and welcome! We believe in: PLAYING IS A SERIOUS BUSINESS! Read More… 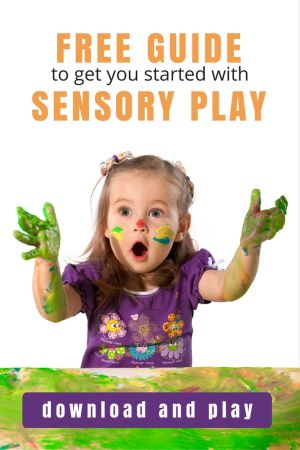